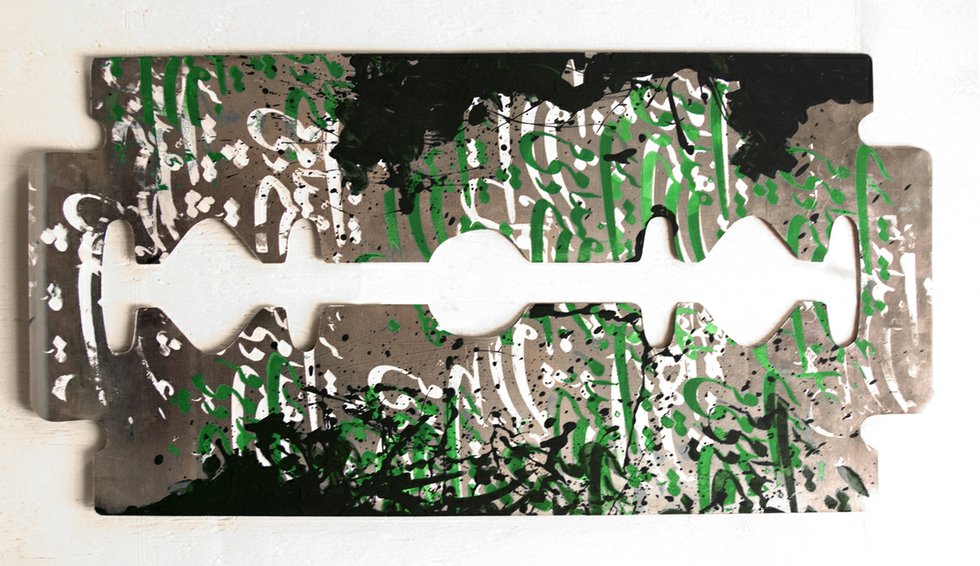 Four large pieces of aluminum cut in the shape of razor blades, each smeared and splattered with paint, sit in the windows of the Mónica Reyes Gallery in Vancouver.

They are the first clue that Too Far, So Close, the group show on view inside the gallery until Aug. 10, is by artists from regions dealing with crises, including Syria, Algeria and Iran.

The paintings, which are not titled, are by Sharareh Khosravani. Originally from Iran, she now lives in Cincinnati, where she earned her Master’s degree in fine arts.

The danger implicit in a razor blade, which can slice through a vein in a second, reflects her interests in psychological trauma, both contemporary and historical.

Inside the gallery, her paintings incorporate Persian calligraphy in the colours of battle fatigues.

Much of Khosravani’s oeuvre is installation and performance, but for this show her works are painterly objects with a nod to Pop art sculptures. 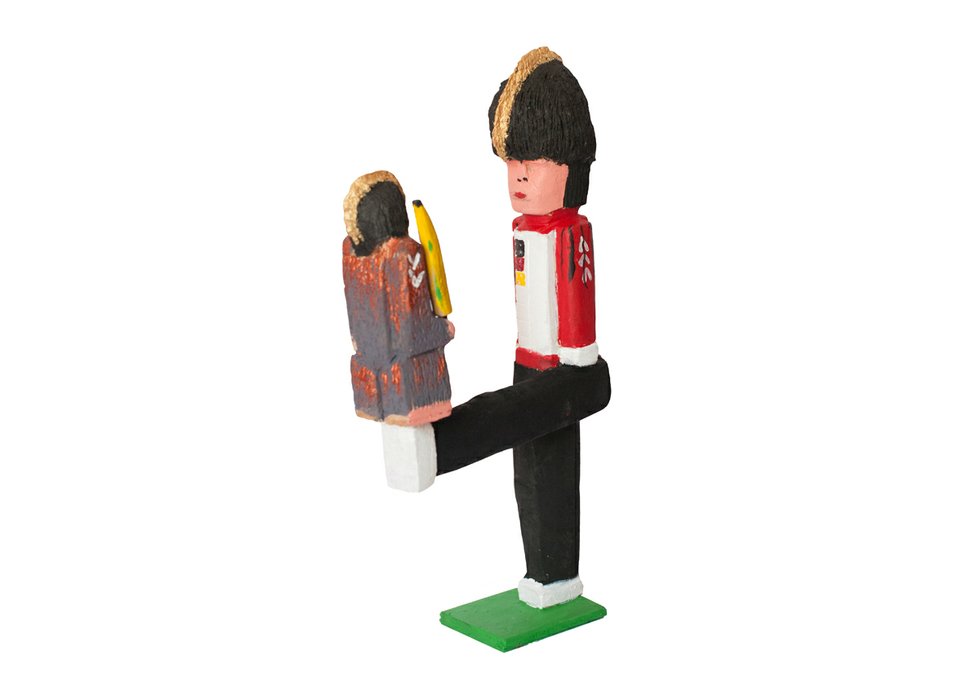 Also in the Pop camp are Amir Kamand’s wooden sculptures of soldiers in the British Queen’s Guard. Playful and witty, they poke fun at the guard’s red uniforms and bearskin hats.

In one sculpture, Kamand places a fish atop the bearskin. In another, a monkey holding a banana as if it were a rifle balances on the foot of a marching soldier. 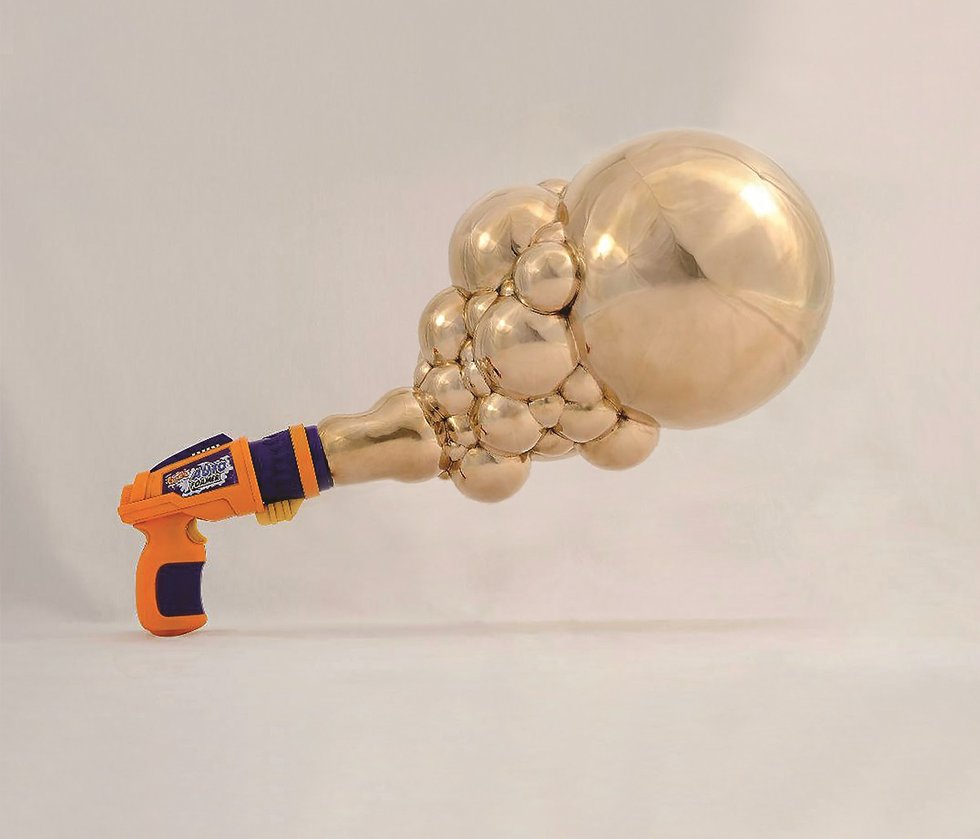 Making light of troubles is a way to deal with trauma and begin to heal. Perhaps for that reason, the show has much playfulness, including Peace Weapon by Kambiz Sharif.

Born and raised in Iran, Sharif now lives in Vancouver. He made Peace Weapon after watching his nephew play with a foam gun. He was struck by how real guns injure and kill, while toy guns are a source of fun.

His hybrid bronze-and-plastic sculpture features a plastic toy gun that shoots bronze bubbles instead of bullets.

Sharif cleverly balances the weight of the bronze with a support hidden inside the toy that attaches to the plinth.

He is making a much larger version of this work as a public art project in Metro Vancouver. 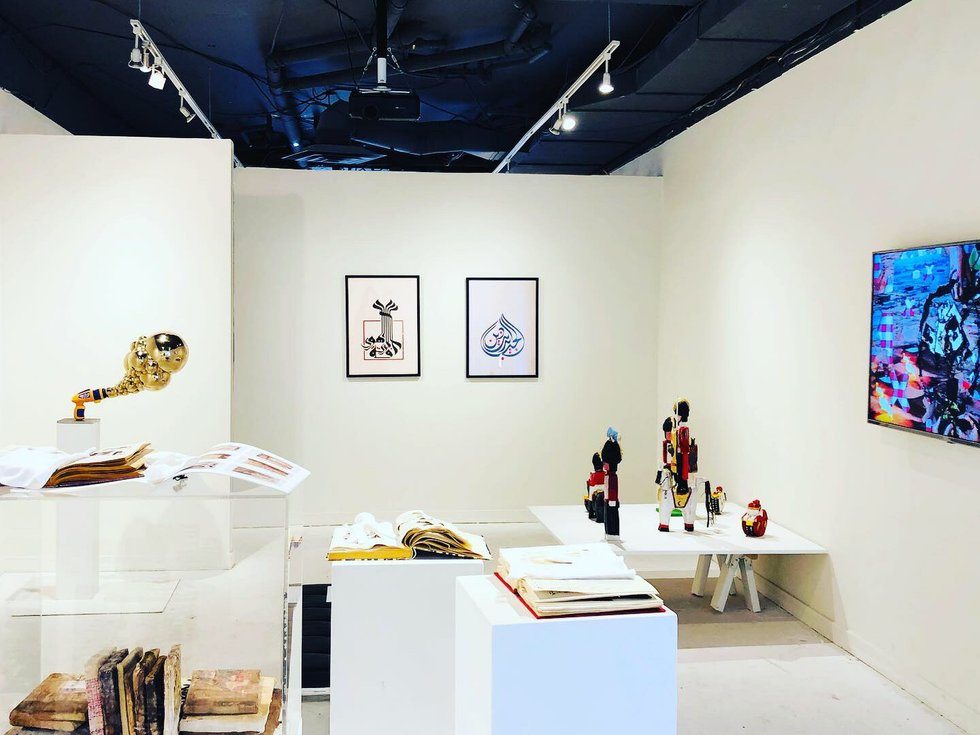 Hamidreza Jadid, an artist who served as the show’s guest curator, immigrated to Canada in 2011 and recently completed a Master’s degree at Simon Fraser University in Burnaby.

He says he feels isolated in Canada.

“While at SFU, my Canadian peers and teachers often asked me to interpret my work. They were Western, I was Eastern. I had to decode cultural references for them and explain cultural connotations. Yet I would never ask them to interpret their work.

“I prefer that they would do some of the cultural exploration on their own. It became a core idea for me to have a different show, one that represented Eastern art made here.”

He talks of a saying in Farsi – “I told my message to the door to let the wall hear.

“It means that I don’t directly reveal my point, but rather convey it indirectly. I employed that in this show.”

Too Far, So Close is a wide-ranging exhibition that brings contemporary Eastern culture and art to the West Coast’s Eurocentric milieu. It does so with humour, subtlety and sophistication. We need more of these shows. ■

Beverly Cramp has written about British Columbia’s art and artists on a freelance basis for more than 20 years. She recently became publisher of BC BookWorld, a quarterly about books published by B.C. authors, including, happily, art books.