Master artist Hassan Massoudy is one of the world’s most influential forces in Arabic calligraphy today. Through his explorative career, artistic experimentation and varied sources of inspiration, Massoudy has achieved a sublime balance that fuses tradition with modernity. Massoudy’s defiant style continues to inspire the ever-evolving creative imaginations of young artists today.

Hassan Massoudy was born in 1944 in the Southern Iraqi city of Najaf. Massoudy moved to Baghdad in the early 1960s where his fascination with modern art was sparked. It was then that he he apprenticed under a number of celebrated calligraphists giving him a solid foundation in the artistic practice of traditional calligraphy.

Less than a decade later, Massoudy moved to France where he went on to study at the famed Ecole Nationale Superieure des Beaux-Arts in Paris. During his studies, Hassan focused on figurative painting by drawing inspiration from the works of Matisse, Soulages, Leger and Picasso while still holding a keen interest in calligraphy. 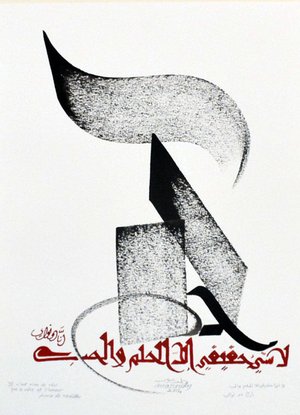 Hassan Massoudy views letters as images that are deeply connected to our human core; through his art, he’s on a constant quest of self-discovery. He seeks to emit truth and sincere human emotion in everything he creates. 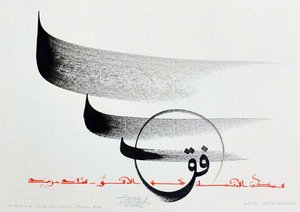 When choosing phrases for his art, Massoudy seeks ones that evoke images. He then goes on a visual quest that keeps the architecture of words in mind. In his artistic process, Massoudy often deconstructs phrases only to reassemble them in ways that are rhythmical, balanced and beautiful. What makes Massoudy’s approach to calligraphy so special is that he dares to maneuver letters and turn them into abstract forms as that feels well-suited to his creative expression. 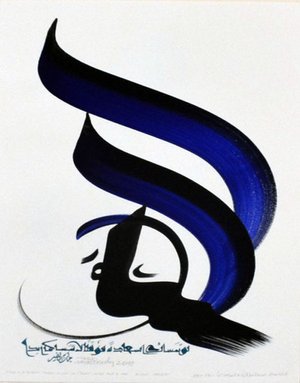 Hassan Massoudy has always held a keen interest in how other art forms could impact his practice despite his focus on being a visual artist. One such venture commenced in 1972, where he devised a show named “Arabesque” alongside actor Guy Jacquet and musician Fawzy Al Aiedy. In “Arabesque”, music and poetry came together with calligraphy being performed and projected onto a large screen for audiences to witness.

“Arabesque” went on to tour extensively around France and Europe for close to 13 years. In many ways, it is looked back upon as a defining era for Hassan Massoudy. It allowed Massoudy to soar in his spontaneity with gestures. More importantly, it crafted his ability to be instant in his self-expression.

Through Massoudy’s interest in a wide-array of artistic styles, he has found a sense of liberty in his creative expression where he subtly mélanges the old with the new. Much like Syrian calligrapher Mouneer Al-Shaarani, Hassan has dared to break away from the rigid traditional practices that had left Arabic Calligraphy in a stagnant state for centuries.

Hassan Massoudy is considered to be innovative for introducing vibrant pigments into his calligraphic masterpieces, which classically use black ink. One could feel Massoudy’s sense of creative freedom through the movement of his lines and the swift strokes and rich gestures that often mimic the spirit of the poetry that the scripts are drawn from.

According to Massoudy, calligraphy can mutate just like our everchanging natures, always morphing into new versions of itself. Its versatile nature allows for endless interpretations.

Zeina is a versatile, curious, and passionate writer, strategist and communicator that immensely enjoys the world of public relations. Zeina has ample experience in the realm of copywriting and public relations with key roles at some of the region’s most celebrated agencies, non-profits and cultural hubs. Zeina thrives on developing real human connections with her clients and readers. Zeina is always on the lookout for a challenge, Her interests in storytelling and client servicing entice her to take on challenging roles that speak to her and elevate her craft.